Co-sponsored by Stamicarbon, the award was announced during a ceremony at the Brightlands campus in Geleen on Wednesday.

The jury was impressed by Vertoro’s advanced plans to extract lignin from wood waste to use as fuel for ships or as a sustainable raw material for plastics. Dysmus Kisulu of Solar Freeze and Werner Schouten of the Young Climate Movement shared second place. The biennial award with a cash prize of €35,000 was presented during the ceremony by Theo Bovens, King's Commissioner in Limburg. Many people tuned in to watch live as the ceremony was streamed via Vimeo.

“Stamicarbon congratulates Panos Kouris on winning this award and the well-deserved recognition for his pioneering work to date. We will be interested to follow his progress,” said Pejman Djavdan (Stamicarbon Managing Director). “As a co-sponsor of the Marc Cornelissen Brightlands Award, we are proud to be supporting the acceleration of breakthrough ideas and the talented people behind them.” 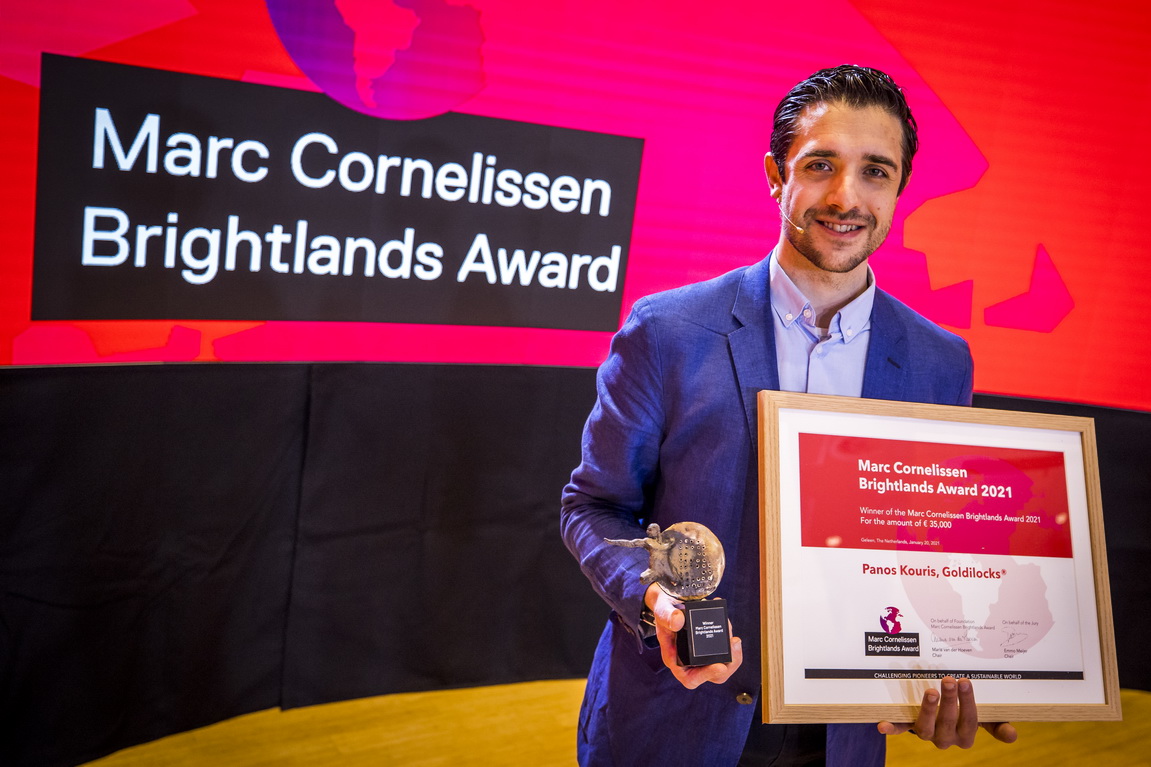 Panos is the co-founder of Vertoro, a start-up which has been located at the Chemelot campus since last year. The company is testing the conversion of wood residue, agricultural products and paper waste into lignin at a pilot plant at Brightlands Chemelot Campus. The resulting liquid can serve as a replacement for polluting diesel fuel in ship’s engines and as a raw material for naphtha crackers instead of fossil fuels. “The maritime sector is responsible for a significant proportion of CO2 emissions,” Panos said. “If we replace diesel with lignin, the emissions will drop considerably and we won’t have to drill for oil anymore. I’m really happy with the award. We can use the prize money to bring science even closer to society.”

The jury also had high praise for the other two nominees. Dysmus Kisulu’s entry, Solar Freeze, aims to market affordable, community refrigeration systems for farmers to enable them to store their fruit and vegetables longer. The goal is for the mobile cooling units to run on solar panels, and for farmers to rent these cooling units by the hour at a low cost. Meanwhile, the Youth Climate Movement communicates young people’s sustainable messages, and connects their voices to politicians, policymakers and the business community by drafting a climate agenda, transition plans and campaigns. 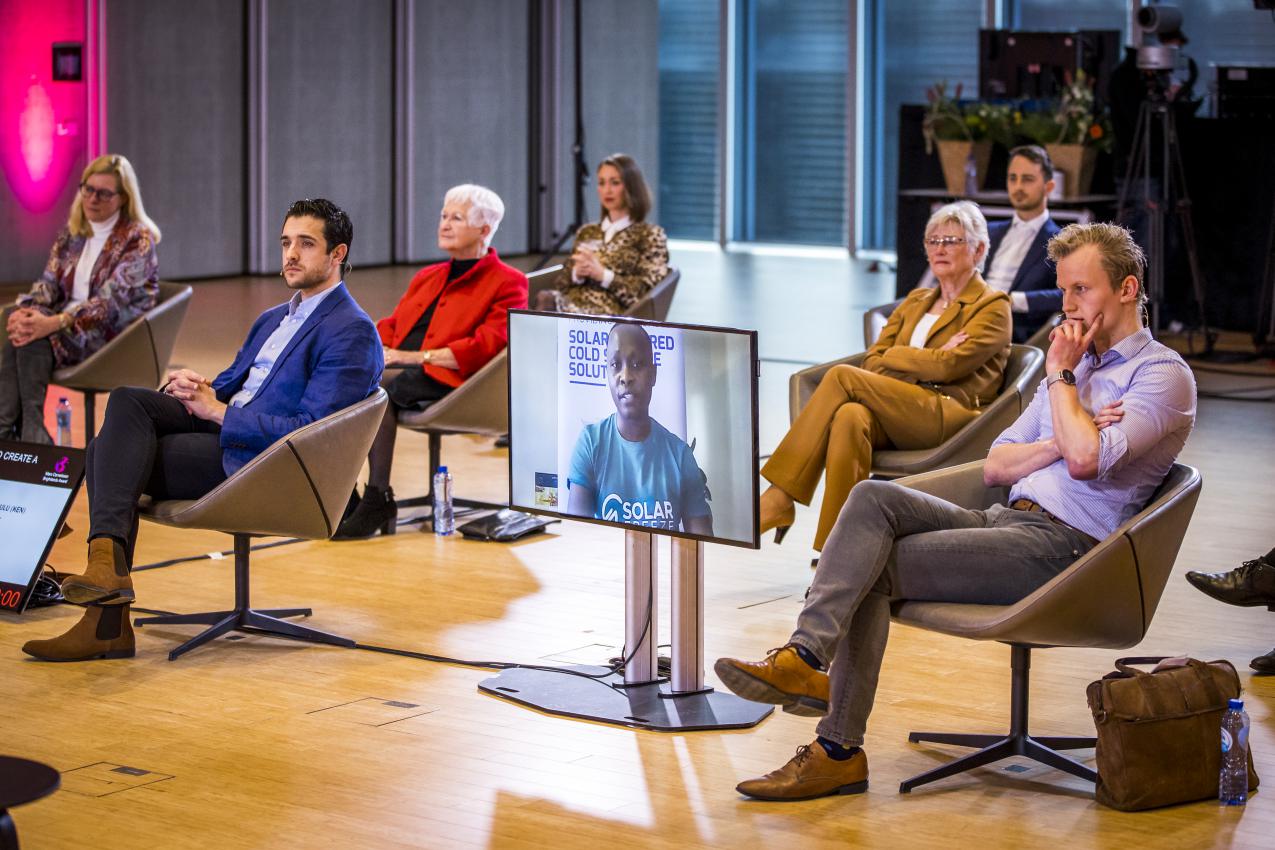 This award pays homage to Marc Cornelissen, the Dutch polar explorer and sustainability pioneer who died during a polar expedition in 2015. The award’s main objective is to motivate sustainability pioneers in areas such as circularity, nutrition, digitalization and health. The cash prize is intended to be applied toward the further development of an idea or innovation. In 2018, medical entomologist Bart Knols won the award for his role in fighting the malaria mosquito.

The event included presentations by Robbert Dijkgraaf, the Netherlands’ best-known physicist, professor and director of the Princeton Institute for Advanced Study, and by Cara Augustenborg, an Irish-American environmental scientist, climate change lecturer, writer and activist who, together with Marc Cornelissen, took part in the Ben & Jerry's Climate Change College. There were also short interviews with some of the supporting partners: Deputy Ruud Burlet of the Province of Limburg, Pascal van der Meulen of Rabobank, and Arnold Stokking of BrightSite, the institute at Brightlands Chemelot Campus that specializes in sustainability and circularity. The Limburg singer-songwriter Ar-Jane also performed during the event. 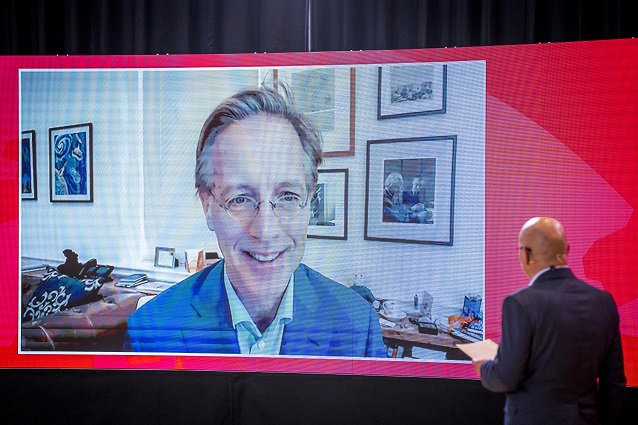