ENEA, the Italian National Agency for New Technologies, Energy and Sustainable Economic Development, will lead an interdisciplinary consortium of nine European partners to develop an innovative prototype for high-temperature electrolysis, using renewable solar heat and power to produce green hydrogen in a continuous way. Green hydrogen is an energy vector produced out of water and electricity from renewable energy sources e.g. solar, wind and hydropower. By working in close connection with leading European industrial companies, this challenging and innovative project called “PROMETEO”, will contribute to move a step forward in decarbonising the energy, chemical and nitrogen fertiliser sectors, in line with the EU decarbonisation targets by 2030. The European Community supports PROMETEO, with a funding of € 2.5 million, provided by the public-private platform "Fuel Cells and Hydrogen Joint Undertaking" - FCH JU.

PROMETEO will use the solid oxide technology to build a 25 kWe prototype electrolyser capable of producing 15 kg of hydrogen per day, with the potential to be replicated on the MWe industrial scale. The prototype will combine renewable heat and electricity to perform high-temperature electrolysis in a continuous way. PROMETEO will address the intermittent supply of solar energy by developing an innovative system to manage the energy conversion and re-generation phases. The final prototype will be characterized by improved efficiency, reliability and flexibility for meeting the energy demands of the energy and chemical industries. 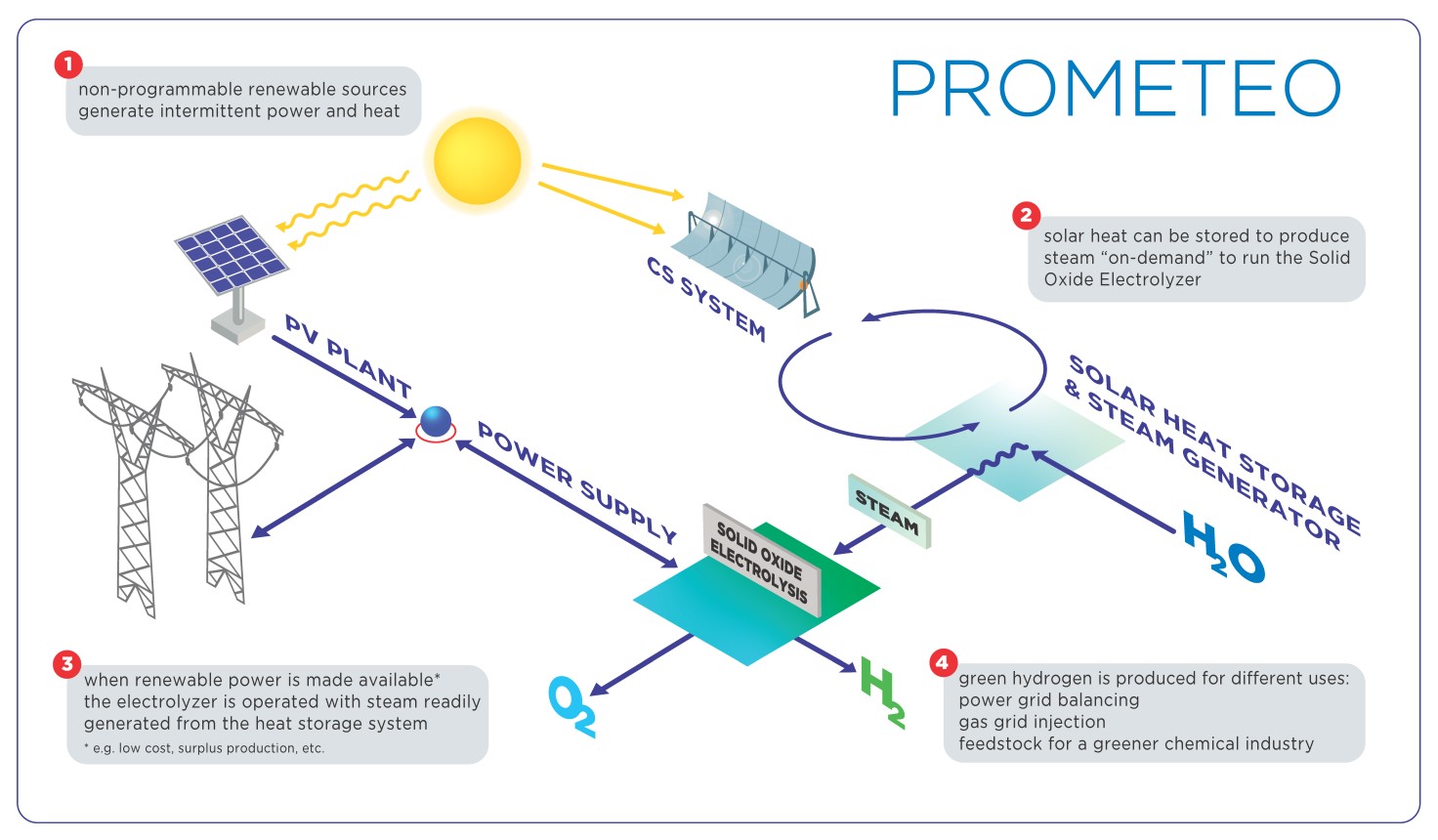 “This is the key challenge of the PROMETEO's prototype: to produce green hydrogen even when 'direct' renewable energy will not be available or when it will be cheaper to use, such as in cases of surplus production. To overcome the intermittency of renewables, PROMETEO will require an innovative system to manage the energy production and re-generation phases by minimizing the withdrawal of electricity from the distribution grid and by optimizing self-production from renewables when solar energy won’t be available,” states Alberto Giaconia (ENEA) project coordinator.

Pejman Djavdan, Managing Director of Stamicarbon states, “Stamicarbon is participating in the PROMETEO project, as this fits our innovation program to develop more sustainable technologies for fertilizer production. The project represents one of our key environmental targets to substantially reduce the carbon footprint of the fertilizer production”.

Barbara Morico, Project Manager for NextChem, comments: “PROMETEO is a relevant project in the framework of NextChem and Maire Tecnimont Group’s green hydrogen initiatives, finalized to the development of a new process based on the high temperature solid oxide electrolysis technology. PROMETEO represents a relevant step for decarbonization, as it aims at improving the integration of the water electrolysis with renewable power sources (solar, photovoltaic, wind)”.